Ahead of his Bookie Fireside Chat (virtual!) with fellow crime writer Sophia Tobin on Thursday 5 November at 7.30pm, William Shaw, a Bookie favourite, had a conversation with us about writing, stories, and crime.

William Shaw‘s The Birdwatcher, set in Kent and Northern Ireland, was longlisted for the Theakston’s Old Peculier Crime Novel of the Year. Salt Lane, also set in Kent, launches a new contemporary series featuring DI Alex Cupidi. His books have also been nominated for a Barry Award, the Golden Bullet, and the CWA Historical Dagger.

You were a music journalist for many years. Why switch to fiction?

This was the place I had always wanted to end up. I thought journalism would teach me how to write and in a way I was right. Journalism gives you the skills to research a story. I never feel nervous about picking up the phone to talk to someone, whether it’s a police officer or an expert on badger behaviour (!) to check if what I’m writing about could have actually happened. More importantly it teaches you is not to be afraid of blank pages.

Why crime fiction? Sell it to us.

Because crime fiction has become the most engaged – and engaging – part of modern fiction, without a shadow of doubt. That’s why it outsells everything else. And there’s a reason why. Crime fiction is an extraordinary mix of the real and the made-up – of fiction and non-fiction. Weriters use things you know are true to make you believe in things that you hope aren’t. We build real worlds and then put murder into them. But increasingly, it’s in the building the real world that’s where the magic in this genre happens. I think so, anyway. Crime fiction has become not so much an investigation of the murders we imagine, but of the world that those imagined murders happen in. Sold?

Does writing about crime ever creep you out?

Mostly writing about something ghoulish is a lot less scary than reading about it. The writer has a privileged view, seeing all the nuts and bolts that make the book work, and mostly that knowledge means that we’re invested in the story in a very different way from the reader. That said, when I was writing a book called The Book of Scars, I was researching the torture that had been carried out on people suspected of being members of the Mau Mau in Kenya in the 1950s and the first-person accounts I read were truly horrific and truly upsetting and it was the thought of people who had seen and done things like that coming back home to live nice lives tending their roses that set off the plot of that book. I don’t recommend it to people who don’t have strong stomachs though.

With crime fiction there are certain beats you have to hit and a formula to follow. Is this constraining or liberating?

Incredibly liberating, paradoxically. In some ways, the beats are fairly simple. Act one. Something really really bad happens. Act two. Things get even worse. Act three. Some order is restored, but not necessarily in the way you expect. In that, crime fiction is basically the latest version of a very ancient and classic form of storytelling. And because some elements of the story are kind of nailed down, that give you huge freedom to play with others.

What is the importance of place in your novels?

Dungeness is massively important in my stories. What a place. That whole series started with me trying to imagine types of people who might want to live there. Humans always imagine what’s going on on the other side of the hill, don’t they? I think whenever I go to new places I’m always kind of making up stories that might have happened there; that’s one way place is important. And once the reader starts to imagine a place, they’re already doing half the work for you! But I chose Dungeness not just because it’s extraordinary, but because it gave me a chance to include the natural world in the books, which I’m really enjoying finding out about. When people describe it as bleak, or as “a desert”, they’re missing out because it’s one of the most brilliant places for wildlife in the south east. The first ever RSPB bird reserve was there. There are plant and insect species there which you’ll find almost nowhere else in the UK. I also wanted the series to be about climate change, in a way. On that vast spit of land, you’re very conscious that the shingle bank was thrown up by nature, and just as easily it can be destroyed.

You often weave real stories and important issues into your novels. Wouldn’t it be easier to stick to fiction?

I really love the stories that real issues kind of throw up. I try very hard not to be preachy though, whatever my own opinions. Fiction works best if it keeps an open mind. If you look at issues like illegal migrant labour in Salt Lane or housing development in Grave’s End, they’re not simple issues with a single answer. When you start looking at all the angles, the stories kind of start to grow.

Shambolic. I do start early but I’m easily distracted. Unlike some of my colleagues who can just put their heads down and write for hours at a time, I tend to do a bit, drift off, do something else, come back, wash up, mend a fuse, answer some emails, find something way too interesting on Facebook and then feel guilty so try and get my head down again for another few minutes.

Margate Bookie are running a series of author talks this autumn, covering everything from love to crime, bibliotherapy to diversity, and more. It’s £3.99 each, or 3 for £9.99. See more here.

Join us for a book club discussing Paul Marriner's The Blue Bench (your ticket includes a copy of the book)!

A beautifully written story of yearning and love in 1920 as a nation grieves - one soul, one person at a time @marriner_p 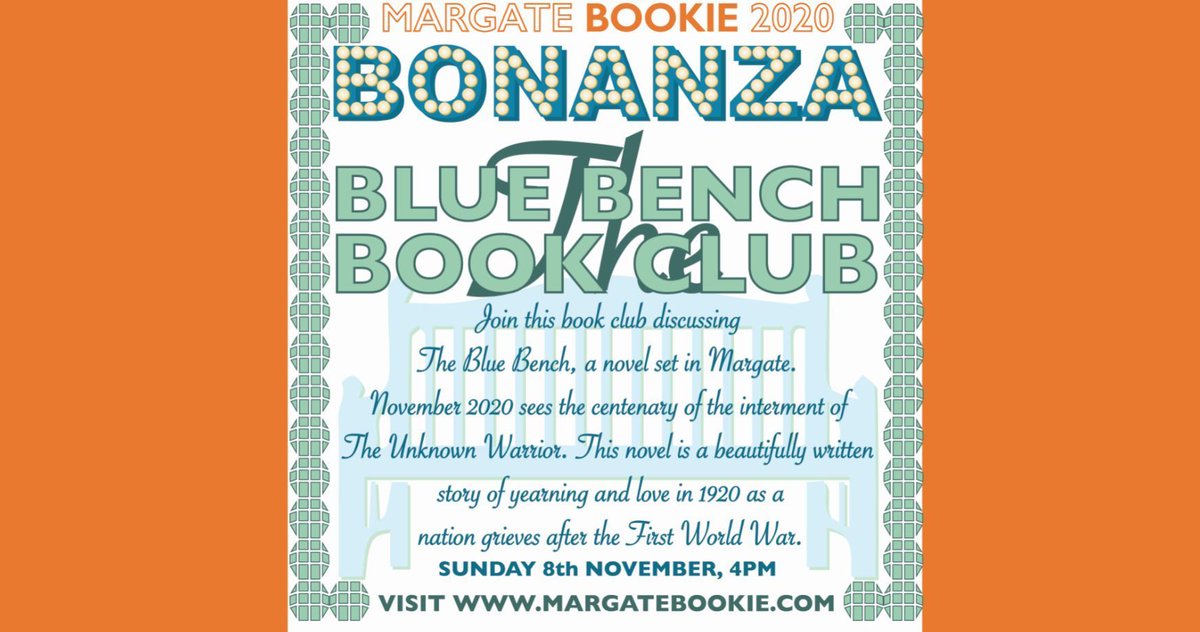 A Different LENS
How many Margatonians(*) know where to find the Greek Orthodox church of the Archangel Michael? Find it on our storytelling map produced through Thread and Word for @MargateBookie
(*) Yes, Margatonians is the right word
#ADifferentLENS https://t.co/7Ozld993MG
View on Twitter